The following is the India’s smartphone shipments grow 20% year on year in the fourth quarter of 2020 From CMR Corporation recommended by recordtrend.com. And this article belongs to the classification: Intelligent mobile phone.

In the first half of 2020, the shipment volume of smart phones dropped sharply, which promoted the strong growth of brands in the second half of the year. With the gradual opening up of the economy and soaring consumer demand, smart phone brands have launched impressive smart phones and offered attractive discounts or discounts during the promotion period. All of these have contributed to the growth of the smartphone industry, with India’s smartphone shipments exceeding 100 million for the first time in the second half of 2020.

5g shipments will continue to grow in 2020, and this trend is expected to continue in 2021. Oneplus is the biggest contributor to the 5g smartphone market, accounting for 58% of the market share.

The overall shipment of functional mobile phones increased by 2% year on year. Although Nokia’s and Samsung’s shipments increased by 7% and 47% respectively, itel’s and lava’s were almost unchanged.

Main market highlights in the fourth quarter of 2020

Xiaomi’s smartphone shipment increased by 10% year on year, ranking first. Hongmi 9 and 9A account for 27% of its total shipments. The sub brand poco had a 6% market share in the fourth quarter. Pococ3 and M2 models accounted for 66% of total shipments.

Samsung grew 35% year on year. The affordable Galaxy M01 core and a21s and A51 models account for more than 45% of its smartphone shipments. Samsung ranks second in the feature phone market, with a 19% share.

Vivo’s shipment volume decreased by 25% year on year. Vivo Y20 series and Y1 account for nearly 40% of its total shipments.

Realme’s shipment increased by 50% year-on-year, mainly due to realme C series products, which contributed 50% of the shipment.

Total sales of feature phones and smartphones of the transition Group brands (itel, infinix and Tecno) increased by 32% year-on-year. Tecno grew 161% year-on-year, infinix 81%, and itel’s smartphone shipments 260% year-on-year. Itel will surpass Samsung to become the leader in the field of functional mobile phones in fy2020.

Micromax re entered the smartphone market, up 75% year on year.

In 2020, the global sales volume of plug-in vehicles will be 3.24 million From EV-volumes 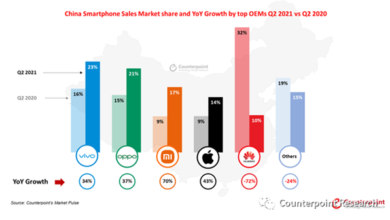 In the second quarter of 2021, China sold 75 million smartphones, down 13% month on month From Counterpoint 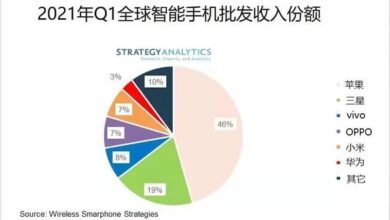 In 2021, the total global smartphone wholesale revenue in Q1 exceeded US $100 billion, with a year-on-year growth of 37% From Strategy Analytics 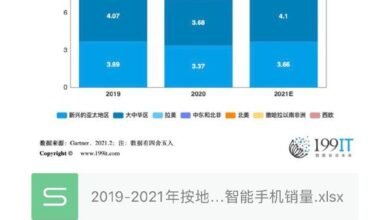