The following is the China mobile game publishers’ global revenue ranking in December 2020 From Sensor Tower recommended by recordtrend.com. And this article belongs to the classification: Mobile games.

Compared with December 2019, the revenue of top 30 mobile game manufacturers in China has increased by 45% in the past year. Although the epidemic has brought a lot of dividends to online entertainment, global mobile game players’ spending on app store and Google play has only increased by 27.8% year on year, and the performance of leading Chinese manufacturers is significantly ahead of the market.

On the one hand, with the accumulation of overseas experience in recent years, the overseas market has become an important source of income for Chinese mobile game enterprises; on the other hand, in the project stage, manufacturers screened products from the perspective of globalization, and successfully created original IP such as Yuanshen and project maker. The emergence of these global blockbusters marks the current situation of China’s mobile game manufacturers going out to sea. They have advanced from the tactical success of buying volume distribution, deep localization and long-term operation to the strategic market insight and product innovation, leading the transformation of the global mobile game industry in multiple tracks.

Special note: This report only counts the income of publishers, and does not include the income of third-party Android channels in China.

With the opening of ice and snow New Year activities, Netease’s “dream journey to the west” mobile game hit a new high since it was launched on December 24. In December, the game’s revenue increased by 43% on a month on month basis, and led Netease’s revenue to increase by 16%.

On December 1, original God launched version 1.1 of MIHA travel. On that day, the mobile terminal revenue exceeded 15.5 million US dollars, breaking its own record. At the same time, it also broke the single day revenue record of Chinese mobile travel abroad. With the launch of version 1.2, the revenue of the game once again ushered in a cyclical peak. By the end of 2020, the total revenue of Yuanshen in the global mobile terminal is close to 560 million US dollars, and MIHA tour has also become the fastest growing mobile game manufacturer in Q4 in 2020.

Thanks to the excellent performance of the “Kingdom era” Christmas activities, the income of IgG increased by 15% month on month and 42% year on year, ushering in the highest income record in the past two years.

In addition, we will be able to obtain the success of the city of Japan in the same day. The rate of interest was 12%, and the ratio was 124%.

Project makeover, a mobile game of time and space mirage, has a revenue of nearly 26 million US dollars in this period, surpassing matchington mansion as the main revenue force of publishers. The successful listing of “project makeover” makes the revenue of time-space mirage increase 76% month on month and 160% year on year, and ranks 39th in the global mobile game publisher’s revenue list.

In December, hero mutual entertainment launched “Zhanshuang pamish” in the Japanese market, and the publisher’s revenue increased by 55% month on month and returned to the list.

In December, the national mobile game “King’s glory” set a new record. In China’s app store, the estimated revenue is nearly 248 million US dollars, up 12% month on month and 60% year on year. The much anticipated “call of duty” mobile game was launched in China on December 25. In the first week, it attracted more than $14 million in IOS, ranking 12th on the airborne list. In addition, Jieba: duel, which was launched at the end of November, was the 13th shortlisted in this issue, making Tencent have as many as eight products in the top 20 of the best-selling list of mobile games in China.

The income of JJ landlords in competitive world surged 34% month on month, and it was ranked 15th in the list. After the outbreak of the epidemic, chess and card, gambling mobile games ushered in a substantial growth in the world, and China’s market is no exception. In the past year, JJ’s revenue continued to rise, reaching three times that of the same period in 2019 in December. 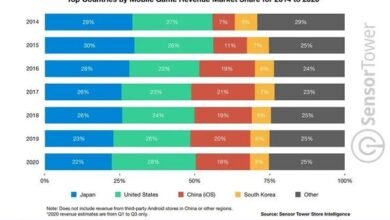 From January to September 2020, the accumulated revenue of Japanese mobile game market accounts for one fourth of the global total From Sensor Tower 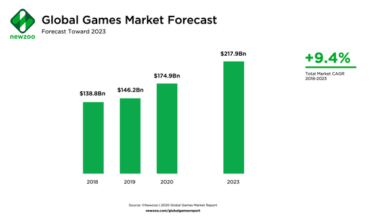 It is estimated that the global game market share will be 174.9 billion US dollars in 2020, with a year-on-year increase of 20% From Newzoo, 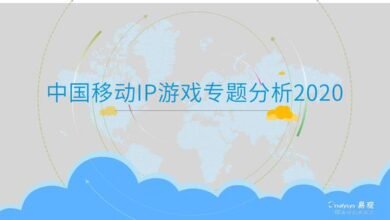 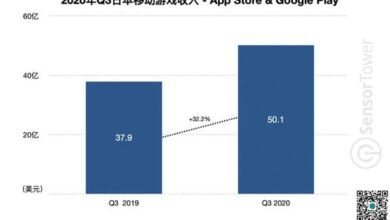