The following is the In the second quarter of 2021, the overall DRAM quarterly increase expanded to 18-23% From TrendForce recommended by recordtrend.com. And this article belongs to the classification: TrendForce.

According to the research of trendforce, it is a critical period for DRAM manufacturers to negotiate the contract price for the second quarter of 2021 with major PC OEMs. Although the agreement on the contract price has not yet been completed, the average price of ddr41g * 8266mbps, the mainstream module, has increased by nearly 25% in the quarter, which has exceeded the expectation of nearly 20% by trendforce. In addition, the price increase of server DRAM, which is highly related to the product category, has also expanded simultaneously. In addition, the second quarter specialty was originally expected   The prices of DRAM DDR3, DDR4, mobile DRAM and graphics DRAM will rise. It is estimated that the average price of DRAM in the second quarter will rise from 13-18% to 18-23%, and the actual increase will vary according to the proportion of DRAM original products.

Affected by the increase in the total production of laptops, the price of PC DRAM rose to 23-28% in the second quarter

The reason why the contract price of PC DRAM rose more than originally expected in the second quarter was mainly due to the active production targets of the major PC OEMs. In addition, the second quarter was the peak season for pen electricity production, and the total volume of pen electricity production of PC ODMs increased by 7.9%. On the other hand, in view of the current epidemic development, the vaccine penetration rate in various countries is still low. Therefore, the pen and TV will continue to benefit from remote office and teaching, which will further expand the price rise of PC DRAM.

The price of server DRAM will increase to 20 ~ 25%, and the bargaining power of the original manufacturer will be stronger

In addition to the still tight supply of DRAM from the original manufacturers, the purchasing power of server DRAM buyers in the second quarter benefited from the optimism of enterprises for it investment, and the momentum of shangyun was stronger than originally expected, which not only promoted the demand to expand again in the second quarter, but also further increased the difficulty of contract negotiation for server DRAM buyers. Especially with the characteristics of DRAM oligopoly market, the original factory will have a higher bargaining advantage. Therefore, it was originally expected that the server DRAM contract would increase by nearly 20% in the second quarter, and trendforce raised its amendment to 20-25%.

More reading: trendforce: in the first quarter of 2021, the overall average price of DRAM will stop falling and stabilize. Trendforce: the spot price of DRAM has not seen a long-term rise, but there is still pressure on DRAM price in the second half of the year. Trendforce: the DRAM market is in the transition of generations. 2021 will be the first year of ddr5’s opening. Trendforce: the price of DRAM in the fourth quarter may begin to loosen, Trendforce: Global DRAM revenue increased by 13.4% in Q1 of 2017, and the price of niche DRAM is expected to be flat in the third quarter, DDR3 has cost advantage and is still the mainstream in the short term trendforce: the global sales volume of new energy vehicles will be 2.4 million in 2020, up 19.8% trendforce: the revenue of NAND flash industry will reach US $14.5 billion in the third quarter of 2020, up 0.3% in the quarter, Trend force: it is estimated that the global Smartphone Production will reach 1.36 billion in 2021, and Huawei will fall out of the top six in the world, Trendforce: Top 10 SSD manufacturers in 2019

Market share of major smartphone manufacturers in Africa in 2020 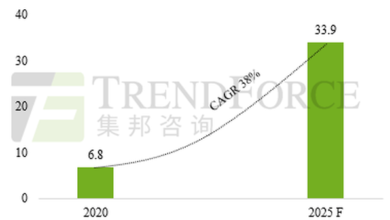 It is estimated that the revenue of Gan power components will reach US $83 million in 2021, with an annual growth rate of 73% From TrendForce 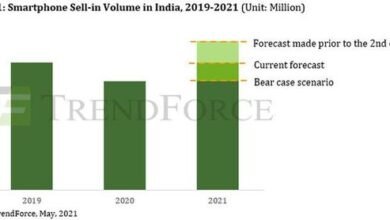 It is estimated that in 2021, the global production of smart phones will reach 1.36 billion, and the growth rate will drop to 8.5% From TrendForce 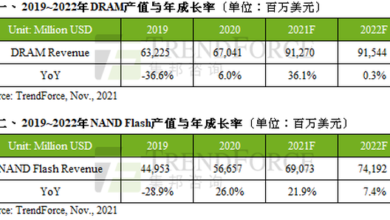 It is estimated that the global DRAM output value will reach US $91.5 billion in 2022 From TrendForce 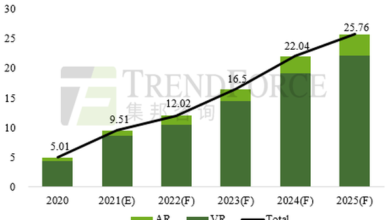 The yuan universe boom will push up the shipment of VR / AR devices to 12.02 million units in 2022 From TrendForce